Chris started playing in 1989 when a friend working at a bar asked him to come try out. He was given three darts and told to aim at the bull’s eye. He checked 2nd for bases loaded, wound up and broke the dart by throwing too hard. Whoops! After a few tries he was catching on and he *definitely* caught the ‘bug’ of a lifetime passion for the game.

Chris had always been into sports: football, baseball, basketball, track & field, and fencing, so practice was a normal routine. As he practiced, he learned from as many others that would spend a moment or two with him. He started with the basics; the math and the probabilities to adjust what you were throwing at to get more recovery chances. Improving and getting consistently better. After two years entering blind draws and leagues 5 to 7 nights a week, Chris became one of the top 10 local players and then transitioned into local sanctioned tournaments. Traveling to other local towns—Austin, Houston, Corpus Christi, Dallas, Ft Worth—all within a 5 hour drive from San Antonio. By 1993 he made the top 50 in the US. Thrilled and full of passion, playing Regionals to gain more points and get more experience! Soon after, he joined the ADO as a Regional Director and began building the foundation of a lifetime of Leadership and mentoring in the sport. He helped set up a rotation that spread the events around, so at least once a year there was an event close to a different group to increase the opportunities for a wider range of people, giving more people the chance to try it out.

In 1998 Chris became the Area Manager for Area 3. Always wanting to coach or help everyone get better. If they did, then he had to push himself even harder to stay up with his protégés to be able to win: “A rising tide lifts all boats”

In 2011 he was elected as President of the ADO, starting his tenure in 2012. He had ambitious goals, with a program to help generate both a youth and woman's format as well as help tournaments come back. All this leading to a clear goal of significantly increasing the number of players in the sport. Unfortunately, an accident had Chris spend 6 weeks under care and facing a very long road to recovery. Today, Chris is back on the Boards again and serving as Area 3 Manager. His focus is on coaching, teaching, encouraging and growing the sport and the talents of our Youth players—the future stars and champs of the game!

Chris was the alternate for the world cup twice, finished 3rd in the playoffs, and was the 3rd highest finisher for 12 events. He won the All-stars in 2007 and was able to go to England to play in the Masters where he made it to top 64. In 2009, the ADO hosted the World Cup in Charlotte where 32 countries had players competing. Chris was in charge of setting up the Finals stage and managing all the score keepers. He has also been the Team Captain/Manager for the Americas cup. In 2012 they won the Gold, in 2016 they lost the Finals to Canada securing Silver.

His goal is to help darts grow back to what it used to be back in the early 90’s or even better! “The more, the merrier!”

We are honored and humbled to work with Mr Helms, a figure that has dedicated his life, sweat, full-hearted passion and even his health to our sport! Please Share in this and help to welcome Mr. Chris Helms to Team Accurate Dart! 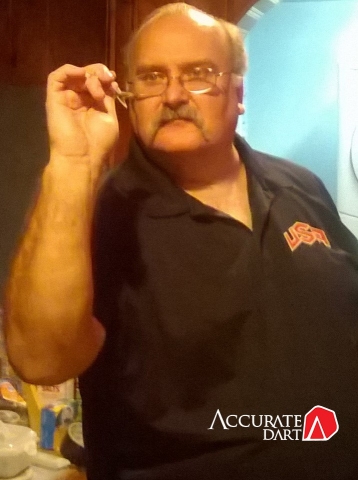